Preston Evergreen is an 8-year-old bear cub who is the son of Forrest and Honeysuckle Evergreen. He originally appeared in the 1987 DiC Cartoon Sylvanian Families. He is considered to be Sophie the Otter's boyfriend. He is voiced by Jacob Ewaniuk in any non-GoAnimate fanworks, as his original actor, Michael Fantini, grew up.

Preston was born on March 7 in the Sylvanian Forest. He lived there all his life. In school, he is considered to be the class clown, which suggests his occasional jokes that he makes to Sophie and the others. At home, he usually helps his grandfather Ernest build inventions.

Preston is a gray bear with a lighter gray muzzle, a pink nose, and a tuft of hair. He wears a white and dark turquoise T-shirt and navy blue shorts.

Preston is good-hearted, willing, and able to help. He has a good sense of humor, which would however sometimes get him into bad situations. From Sophie's POV, he is seen as somewhat of an annoying younger sibling figure.

Him and Sophie as kangaroos, 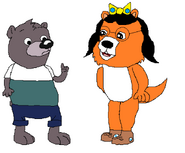 Looks like he and Sophie have swapped cartoon styles,
Community content is available under CC-BY-SA unless otherwise noted.
Advertisement